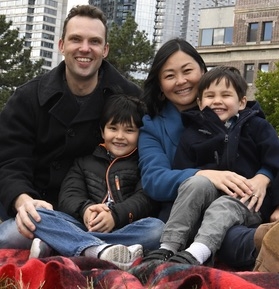 One afternoon at daycare, three-year-old Mark Collins woke up from his daily nap. But something was wrong — despite having just woken up, he was still incredibly sleepy. The teacher quickly realized that Mark was unable to move. He could recognize everyone around him, but was having trouble responding.

Soon, Mark was in an ambulance en route to The Brooklyn Hospital Center (TBHC). His mother, Laura Collins, left work and met her son at TBHC’s Pediatric Emergency Department (ED).

“It came out of nowhere,” Laura explained. “Mark recently started taking Children’s Zyrtec — but this was way different than being diagnosed with seasonal allergies.”

At the ED, Mark underwent a CT scan, which showed nothing out of the ordinary. The pediatric emergency doctors kept close watch on Mark throughout the night, thinking of a possible diagnosis of Guillain-Barré syndrome, a rare disorder in which the body’s nerves are attacked by its own immune system.

Mark was soon moved to Pediatric Intensive Care (PICU). The doctors performed toxicology reports, spinal and blood work. In the meantime, Mark had lost his ability to walk and was unable to stay awake.

“The staff was extraordinary,” Laura said. “One of the doctors from the ED even visited Mark in the PICU. What a sweetheart!”

TBHC’s Pediatric Critical Care Specialist, Dr. Louisdon Pierre determined that Mark had ataxia, a neurological disorder that affects the nervous system and inhibits coordinated movement. It wasn’t a common occurrence, as ataxia does not normally present in such a delayed fashion. Rather, Mark exhibited a sudden onset of the disease.

Dr. Pierre worked with TBHC’s Neurology Department and together the team determined that the ataxia symptoms were an unusual side effect of the Children’s Zyrtec Mark had been taking for his allergies. 24 hours after treatment, Mark’s symptoms stopped. After 48 hours, he was able to quit his medication altogether.

Mark thinks TBHC staff is “awesome,” from the EMTs in the ambulance to Dr. Pierre and the rest of the pediatric team.

His mom agrees. “Each of these incredible people delivered excellent medical assessment, knowledge, and clinical skill with soothing support, care, humor, and kindness,” she says. “We felt well-informed and taken care of during a very scary time.”

Mark’s older brother, 7-year-old Sean, said when he visited his little brother at TBHC, “This place is a masterpiece!”